Virginia's 80th birthday party was the day our spirits first connected. In the midst of the festivities, I had something to say and she heard me. Neena had decorated all the tables with Kalanchoe; orange, red and pink. After the party ended, she sent them home with everyone who would take one. I took a red one. 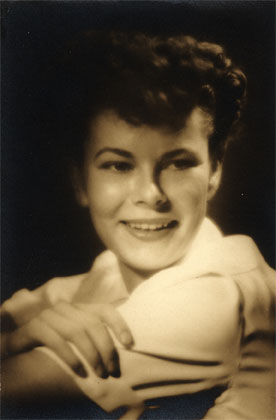 Virginia had such a sense of the rightness of things. She always made everything 'just so', down to the food on the table. It not only had to taste delicious, it had to look delicious. Neither of us admired the flavor of Bell Peppers too much, but she often had a Red Bell to top the winter salad. It looked right, was how she put it. She so loved Neena's floral arrangements and often lamented at how she was never quite able to do such a delightful job in the vase herself. She was so proud the day she told me how Neena described holding the flowers up to the vase at counters edge, and cutting the stem bottoms at just the right height to place the flowers where you want them to fall. It mattered to her that she could learn that from Neena.

Virginia and I would talk at length about our experiences and we often found that even at 40+ years difference in age, we had some remarkably common ground. It is so precious to find someone who understands what you say because they too lived it, not just because they understand the words. She didn't quite fit the molds. She was a unique woman and she found a way to make that uniqueness her strength. She was able to use her insight, her special way of looking at life, to help other people find their way. She always seemed to have just the right amount of advice blended with just the right amount of concern and commiseration to make her friends feel blessed to know her.

When Virginia began to become forgetful, she would tell me about how it felt. She said she wanted me to remember - this was her gift so to speak. To describe what it felt like to her to grow old. To lose some of her mobility and to be unable to recall the word she sought to describe some thing. Of the many experiences she spoke about, she made certain to express that she was having fun with most of it. It seemed almost to be more fun than she'd had for a while. It was like rediscovering herself. I think we get so used to how we function and who we are that we begin to take living for granted. We forget to continue to adapt and grow. When these changes began to be noticeable to her, in true 'Virginia' form, she took the bull by the horns and experienced them as fully as she could. Her pleasure in her new circumstances was apparent and contagious.

Among the things Virginia and I have in common is a love of the garden. When I look out into my back yard and see the raised bed with the Bright Lights Chard, I remember her lower vegetable bed at the far end near the old rabbit hutches where the Bright Lights Chard grew. The striking Red, Yellow, Orange and Green are such bold colors, just as bold as her personality. Beneath my Italian Prune still grow the Perennial Phlox she gave me. Tall stems topped with pink flower clusters over which the deep purple fruit of the plum bends. And Oh the Irises! So beautiful...this flower has a scent that evokes peace and pleasure for me. One special moment for me was telling Virginia why I love Irises so much. Their fragrance is just like my grandmother's garden or living room in the springtime. If you know Irises, you know they don't have a sweet scent, more pungent, but none-the-less precious when you recall the peace and comfort of childhood. While she didn't share my fondness for their scent, she brought me a bag of Iris rhizomes. So many of the most precious things in life are more pungent than sweet. Virginia and I had many differences and yet, we shared many similar experiences.

She and I often spoke in terms of the garden. One day when we spoke, she seemed sad, a little low. In response to my question, she divulged how disappointed she was that she could no longer work in her garden. This marked a turning point in her descriptions of her aging. Her garden had given her so much pleasure, but she just couldn't manage to care for it the way she needed - to keep it 'just so'. You might think the solution to this is to hire help, but all that does is stimulate the esthetic sense of the garden. It doesn't address the communion a gardener finds in their garden. And that was the loss to her. She knew she wouldn't be able to experience that any longer. To get down on your knees and smell the earth as you pull up a weed before it takes hold - to see old friends showing their first buds in springtime - to watch the babies you cultivate grow and become beautiful.

She hated being told she couldn't do something. When you have to rely on others to do things you've done most of your life, you feel a little useless, like you've lost something precious. Well, you have. Eventually, she accepted that these were things they needed to do, not just for her, but for themselves as well. She gave so much to people - they were there to help her when she needed. Then came a new change. She didn't seem to have the same playfulness any more. The last year or so, she wasn't having fun. She was tired of old age and becoming dispirited.

When the cancer diagnosis came just before we left for a month long trip to Europe, I thought I would never see her again. I experienced that trip with her often present in my mind, thinking of how she would see the things I was seeing. I grieved for her, fearing that I wouldn't be able to share this trip with her when we returned. I consider myself very fortunate - I did have an opportunity to talk with her about the trip. Just one evening, and she was very tired - having to go through treatment for cancer, weak from what she'd been through, having suffered from a serious infection and being hospitalized. She didn't have quite the same pleasure she would have before, but she listened and asked questions and shared.

She never really regained her former vitality, and over the next several months seemed to be up and down in spirit. A week and a half before she passed, I had the great joy of seeing her old self. When I approached her to say hello as she sat out on the back deck with old friends, she looked at me just as she used to, with that same glint of pleasure and conspiracy in her eyes and spoke as clearly as before. It was like having an old friend return from being away. 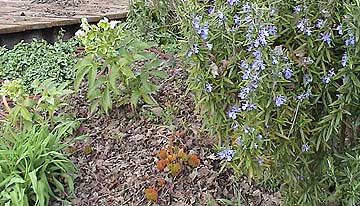 That Kalanchoe reminds me of how our friendship began. Mine is growing in my garden where it's been planted ever since I brought it home. Every time I pass I think of Virginia and remember that day. It's planted next to my Rosemary, which coincidentally represents remembrance. And on the other side is the Helleborus she gave me, commonly known as the Corsican Rose. For the first time this infant plant brought forth it's beautiful blooms. It's pale green flower heads topping the spiked leaves showed themselves this year, I believe in honor of Virginia. They began blooming in December and continue even now. Below the Rosemary are the lovely peach colored Day Lilies from Virginia's garden. We all remember her for the primroses and pansies, but she also had a love of flowers and plants that often faded into the background of those showy prima donnas. She felt the same way about human beings. She found pleasure in unexpected places - and in unexpected people.

The last time I saw Virginia was on the Sunday evening before she passed away. She had spent the day with her brother and other of her relatives and seemed to have had a great time. We arrived as most of them were leaving and spent a few hours visiting and laughing. Just before Frank and I left, she made eye contact with me. She just stared into my eyes and I remember wondering at the time what she was trying to convey. Was she tired and wishing we would go, or was she just remembering times we had spent together? Maybe she wanted to say something for which she couldn't find the words. I didn't say good-bye to her that night - she had gone to her room before I finished getting my coat. I'd like to think she was telling me she will see me again.