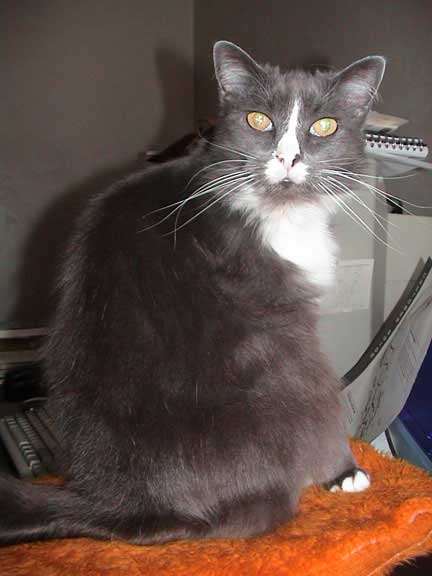 A few photos of Grace

Grace was the last of her siblings to leave us. She was a much more complicated cat and it's difficult to describe her in the simple terms I was able to use for them. Grace, like George, was very clever. If I did anything to annoy her, she'd find a way to punish me. She was also a very thoughtful girl. You could almost see the wheels turning when you looked at her. And she was fierce! When she was young, she was a little scary sometimes:) She could only play using all her claws. It could be quite painful.

Grace was the first Frank pulled from the shrubs at about 3 weeks old, and we both felt she wasn't the cutest kitten we'd ever seen. Her fur was short then and she had a big, bulging white tummy. She got her name early on. While they were young, we had a jacuzzi tub that was set into the floor. It had a narrow edge around the wall sides and she was always trying to walk around the edge watching our feet in the water. Invariably, she'd fall in. Ever seen a cat levitate? As it turns out, she developed a sort of arthritic condition in her rear legs when she was around 5, so it was probably just her luck. The great thing about Grace was she really did turn out to prove the story of the ugly duckling. By a year old, she was a beautiful swan.

When they were very young, they all had digestive issues. There was a week when I took them to stay with me on a mini-vacation in Sacramento. Klaus was very ill and the others needed a little special attention. We would all take an afternoon nap at the same time and each day during that time, Grace would climb up next to me and sleep curled up on my shoulder. When I would reach up to pet her, she'd purr and curl into a tighter little ball.

She was such the little princess I had to keep the boys away when I played with her. If they were around, they would easily overshadow her, but she would also hold back and not participate. I always had to make special time with her for play.

Of course, they were all little beggars when it came to human food. The boys wanted anything we ate, but Grace was much more selective. She'd always watch to see what we were having, but only really insisted on having some in a few cases. I think more than anything she loved chicken. Any chicken dinners she'd make sure she got a bit for herself. Her other favorite food was corn. She'd nibble it from the cob or just eat cut corn from a dish.

During her middle years, Grace was a commanding presence in the garden. She would often spend time out there with me while I was working. While the boys wanted morning walks and evening playtime, she would always be with me while I worked (and they were taking their all-day catnaps). She would run along ahead of me when I was carrying soil or plants and I can still see the long fur on each side gently wafting up and down as she moved. And that tail standing at attention! When I knelt down, she'd come up next to me and watch my work. She was extremely respectful. When I'd turn to her, she'd just stare at me, and if I spoke, she always responded with a little chirp. When not sitting next to me, she'd spend time nibbling on catnip or curled up and grooming that beautiful coat of hers.

When Foxy came to live with us, Grace developed a sincere hatred for her. We had an incident one evening that resulted in Foxy needing some stitches. After that, we were forced to make certain Grace didn't go upstairs and that Foxy largely stayed there. Foxy knew the dangers and was pretty cognizant. However, on occasion I'd wake in the night to some faint noise. When I'd look over at the doorway to the bedroom, there would be that little spike between two white puffs. That's all I could see of her. On a few other occasions I'd go into the bathroom and startle her while eating from the upstairs cat dishes. It wasn't that the downstairs dishes were empty -- just a territory thing.

During her last years, Grace and Foxy learned to co-exist within inches of one another. We would often look at one another in astonishment and shake our heads. Once this became evident, we started encouraging Grace to come upstairs and curl up in bed with us. She did so from time to time, but her domain was downstairs and she rarely stayed upstairs for long.

Among her favorite tricks was to go up to Klaus while he was sleeping in the corner chair. She'd stand up on hind legs, with front legs on the edge. She'd lean over and make sure he was asleep, then she'd whack him on the head several times with her paw; claws extended. Of course, he'd be terrified to be startled out of sleep that way and would take off. She'd then hop up and curl up in his nice, warm spot.

Grace also mastered the art of chair stealing. She'd be constantly aware of us while we worked. As soon as we'd get up to do anything at all, she'd hop over into our chair, curl up and pretend to be asleep. Aarghh...

She was as fond of Bandit as Ira was and fought to be near him. She owned the garden for many years, allowing Sam when he was small to spend time out there. Once he became an adult cat, she put an end to that.

She was extremely affectionate, and would love nothing more than sleeping in our lap while we worked. However she was very subtle and it was easy to overlook her while she sat nearby staring intently at us. That is, of course, until we felt her eyes boring into us... She always spoke to us when we entered a room where she was. Frank always called her Pterodactyl because of her unique sounds. She loved to sit in our lap and never tired of finding times to do so. She adored catnip and canned cat food. In recent years she acquired the nickname, Barfer. That incredible fur often led to hacking - sadly she didn't understand guests aren't as sympathetic to the view.

Grace was our thinker. Once a few years ago, I started to notice her sitting in the corner of the dining room, facing into the walls. At first I joked with her asking what she'd done wrong, but when it continued, I realized there was something else going on. Talking to her didn't distract her and eventually the other cats noticed her behavior. They too joined the act. The only thing I could think of was that she was hearing something in the walls (which was unnerving).

After a few weeks, they started doing the same thing in the hallway in front of the furnace cold air return vent. Frank and I opened it up one day and saw the tail end of a mouse skittering down a hole.

Grace retained her vigor and much of her energy until about two weeks before she passed away. Although her weight had dropped she was still running around the house and fulfilling all her normal routines perfectly. During her last weeks, we put a cat house into Frank's office for her to sleep in. She enjoyed being there very much. She would scale the leg in order to climb up to the top and hop into the cuddle cup we put there. We have some videos of her about 10 days before she passed showing her climbing. We were calling her 'monkey cat' then.

As has happened repeatedly among our clan, she started to feel unwell and stopped eating. We were able to reverse a little bit on occasion those last weeks, but not enough to make the difference -- the decreased appetite builds on itself. I began to suspect kidney failure based on observable symptoms. She became less and less engaged in interaction over the last 5 days or so and we again had to make that heartbreaking decision. Unlike George, Grace was not a cat who tolerated the slightest medical care from us. And as with the cancer, there is no cure for kidney failure. The veterinarian concurred that kidney failure seemed probable.

Once we realized the severity of her state, we asked our Dr. Nelson to come and help Grace leave us. This occurred on Wednesday January 21st about mid-day. Here's what I wrote to a friend that day:

"Grace just isn't a cat that can tolerate being treated for anything and that's not how I would want her life to roll out. She has largely disengaged from life the past week and only ate a negligible amount yesterday. She didn't have enough pleasure to compensate for unpleasant measures toward life extension. Even Frank believed she wasn't interested in going on and that's pretty profound for him.

It's a different household again. It's so strange to have all of them gone - losing the last of the generation. They were here with us for everything. Foxy seems contemplative, but maybe it's just the vaccination effect :)" 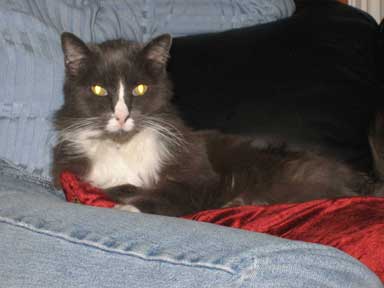