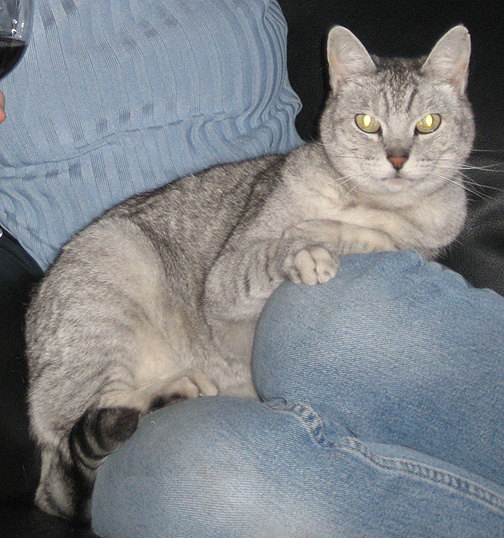 Foxy in my lap.

Foxy came to us as a foster baby, but Frank would never let her go back for adoption. Remember back when we had an Acapulco restaurant in Santa Rosa? It was a frequent dinner spot for us - relatively quick and easy. One evening when we crossed the street to our car, we heard a kitten mewling. Being it was such a busy traffic area, we started looking around and found a 10 or so week old kitten beneath a car near ours. We took her home but in our small place and with our brood hovering, it was hard to know what to do. Of course, Frank immediately named her - sandpiper - because of her long white legs. I was volunteering at Humane Society at the time, so I insisted on taking her in for lost and found, and if not redeemed, to be put up for adoption. I felt there was too much cat competition at our home. Frank didn't like the idea, but agreed. One day while he was out at HS looking at the finished clinic/cat room he had donated, he found Sandpiper. This must have been 2 months later. She'd been in adoption, come down with some upper respiratory issue and moved to clinic for meds and recovery. He went to the manager's office and left a note asking to have her returned to us, willing to pay an adoption fee. Next time I went in for my shift, the manager told me Sandpiper had been adopted and would I come with her. She took me into the surgery and opened one of the cages. She pulled out this tiny kitten whose body just fit into the length of her hand, leaving head and legs dangling at the edges. This little kitten had undergone her spay surgery, but as happens in some cases, hadn't come out of the anesthesia well. She asked if I would take her home for Frank to foster since Sandpiper already had a home. Of course, I said yes. That's how Foxy came to us.

During this period, Frank was working at home on his 'bible' and was able to feed her and play/cuddle with her regularly. Of course, the medicating was my responsibility. This tiny silver tabby (about 1.8#) was soon christened Foxy. At first, we kept her in a large kennel to keep her separated from our brood, with every intention of returning her for adoption when she was well. Among her problems was not eating well. It was always a challenge to get her to eat much of anything. That meant, she stayed with us as a foster baby for quite a time. Eventually, she became part of the family and we chose to keep her.

I've always said Foxy took after Frank. He has always been guilty of pushing the envelope just far enough to create crisis, and she was just the same, the little devil! I would bring home grocery bags and she'd hop up onto the table, use her paw to extract small cans or jars and 'push' them to the edge of the table. It was like a game when it went over the edge and she could jump down to chase it. We tried to keep her indoors, but whenever the front door was open for any reason and she was nearby, she'd dash outside. She resisted capture until she got frightened of the noises and movement. Eventually, she decided on her own to live as an indoor cat. She eventually developed a fondness for dry cat food, but it took quite some time.

She seemed to be low man on the totem pole around here. Ira had a way of looking at her that sent her running. Klaus would chase her. One night, Grace cornered her at the litter box and we ended up in the emergency hospital, getting her belly stitched up. Grace had torn a long slice through her skin from belly to rear leg. Fortunately it didn't penetrate through deeper tissue and only required some surface stitches. It did however alter the household. Grace was from that point banned from the upper floor where Foxy stayed. Our Bandit was sort of the 'head' of the cat family and very sweet as well. For whatever reason, he never seemed too disturbed when Foxy would bop him on the head while he was eating from the dry food dish they shared. Heaven knows what she was thinking. He was at least twice her size.

She was a true lap cat. Whenever I'd sit down, she'd creep into my lap, usually by pushing her nose beneath my arm and crawling in from the side. She also loved to bash her head into your beverage glass or cup, typically causing the lucky recipient of her 'love' to spill. For such a little thing, she had an outrageously huge voice. She used to frighten visitors who attempted to pick up the little flirt by squalling at the top of her voice when they lifted her. I would sometimes entertain people by repeatedly lifting her, each time she would would wail. As soon as you put her down, she'd shut up. You could do it over and over and she'd repeat it each time. She used to love to run along ahead of us wherever we were going and then turn into our path. When we walked into her, she'd screech as if we'd stomped on her. She and Frank had a great game they played. Every time he'd go for a shower, she'd run into the bathroom, hop onto the counter wait for him to finish. As soon as he'd open the door and reach for his towel, she'd start chattering. She'd stand on her hind legs and reach her front paws to him. When he held out his hand, she'd rub her head all over hand and arm, as though acting as feline towel.

This is a work in progress, so I will be continuing...this has been the most difficult one for me to write.