A few photos of Sam

Then sing, ye birds, sing, sing a joyous song!
And let the young lambs bound
As to the tabor's sound!
We in thought will join your throng,
Ye that pipe and ye that play,
Ye that through your hearts to-day
Feel the gladness of the May!
What though the radiance which was once so bright
Be now for ever taken from my sight,
Though nothing can bring back the hour
Of splendour in the grass, of glory in the flower;
We will grieve not, rather find
Strength in what remains behind;
In the primal sympathy
Which having been must ever be;
In the soothing thoughts that spring
Out of human suffering;
In the faith that looks through death,
In years that bring the philosophic mind.

The first day I met Sam was his very first day in the shelter. He'd been brought in by some people who had discovered a mother cat with kittens in their barn at the same time their precious Siamese female had birthed an unwanted litter of kittens. Unwanted, because the impregnator had NOT been a pure bred Siamese. They brought the mother barn cat and her kittens, along with the Siamese half-breed kittens to the shelter claiming all 9 were of the same mother. Of course, this is all simply logical deduction because of the litter size, but very likely close to the truth.

In any regard, when I walked into the new kitten ward that day and found a cage full with a poor little mamma cat and so many kittens, Sam had been pushed out of the nest. I put him back into the group and went off to take care of some of my other responsibilities. When I returned a while later, he was again outside the nest on the floor of the cage. I picked him up and held him on my chest beneath my hand to warm him up. He was only about 3 weeks old and fell asleep fairly quickly. One of the tasks I had was to find a foster parent for this gang. I called my mother explaining some would need to be bottle fed while others could be fed by mamma cat. Mamma cat could not feed all those kittens sufficiently. My mom agreed to take them on and they had a wonderful start in life, as she managed to take care of all of them.

Mom cat first, then all the kittens returned to the shelter for adoption, but Sam became ill. I discovered him in the 'sick ward' one day while there. I discovered him because even way out in the front office, you could hear his yowling! I went back and discovered he was there. This was a period when the shelter was very full and foster parents unavailable. I chose to take him home with me and some medications to treat his eye infection and upper respiratory problem. Because his illness proved to be resistant to the medication, he was turned away from the adoption program. I decided to take him on as one of our own, and when we came back from the shelter that day, he came to stay permanently. I took him to our regular veterinarian who changed his antibiotic and said wait it out. Luckily, he recovered from all his symptoms within a couple of weeks. He experienced one further eye infection about 2 months later, but thereafter he was a healthy, stocky little champ.

Sam was very shy. Most of our friends never met Sam once. He'd hide upstairs when people were around, although around 11:00pm if we had guests, he'd wail from the top of the stairs calling us to bed.

Sam developed a very sweet little habit of 'blessing' my forehead. He'd sit up on top of his condo and if I would go over to pet and cuddle with him, he'd close his eyes, purr and lean over to lick my forehead. He was one of those lovely little angels. He'd occasionally sit across the room being 'solemn' Sam. He'd just sit there with a very still, solemn face. He could also speak without opening his mouth -- well, maybe more of a moan. He hated hot weather and would plop down on the wood floor and moan every time the weather exceeded 85ºF.

Sam adored catnip! He loved to go out into the garden and roll around in the plants. By careful exploration, he found each plant and would become intoxicated as he made the rounds. Each night after Frank had his shower, Sam would hop onto his cat condo house and sit waiting, often making a quiet plea for Frank to come and do his CCMT thing -- Certified Cat Massage Therapist ;)

The year we went to Europe for a month, I asked my nephew to stay here and take care of everyone. During our trip, Sam moved out. He was always a true scaredy cat, but he simply couldn't deal with having anyone other than his people living here. Luckily, he only moved next door to Doris' place (who had always loved him) and stayed on her patio. She put out food and water for him. It took us four days when we returned to get him to come near us. When I was finally able to reach out and touch him, I grabbed him up and brought him home. It only took a few minutes for him to re-settle back with us, but it was certainly an unsettling experience.

One of Sam's annoying/endearing habits was to hop up on my desk while I was working. He'd start by sitting or crouching and staring at me. Then, if I didn't pay enough attention, he'd walk to me, standing over or on my keyboard and push his head against my chest. He'd keep this up until I finally would move back from the desk a bit and he'd climb into my lap. He'd continue to rub his hand against my arm or hand preventing me from doing anything very well. He'd just lay there and purr and cuddle as long as I'd allow or until Frank came upstairs.

He had a habit of waking me up during the night; he always slept on the outside of the bed on my side. During the nights, he'd go off to have a snack or take care of business, then would return and insist I wake to greet him. His method of waking me ranged from the sweetness of rubbing his head on my forehead, cheek or arm, to the creepy-Sam behavior of sitting and talking to me until I finally woke fully.

In 2007 Sam started to have a chronic upper respiratory problem, the symptoms being discharge from one nostril and general lethargy. I took him to a local veterinary hospital where I was told he probably had a tumor in his sinus area. There were a number of invasive diagnostic treatments that could occur, but at his age (then 13) I decided not to do any. I asked for antibiotic instead and it did seem to clear up the problem for the time. It continued to re-occur and I finally sought advice from another vet who prescribed a regular dose of antibiotic for 5 days each month. This approach did work and we were very happy.

In late 2009, I noticed a lump on Sam's throat. It was time to find a new, regular vet again, so we chose a lovely lady, Dr. Joy Mueller at Guardian Pet Hospital. She did some testing which initially seemed to indicate nothing serious, but was eventually diagnosed as lymphoma. We elected not to do chemotherapy but rather some steroid and antibiotic treatment to keep him comfortable and eating well as long as possible. Prognosis was two to six months. Sam generally did very well during his last days, although we did have to adjust and change to different meds once or twice. His last day was pretty bad, but he didn't have to go off to get special treatments and was able to remain in his safe environment, keeping to his normal routine up until the end. He was a very precious part of our life and we will miss him deeply. Bless you Sam for all the blessings you gave to us. 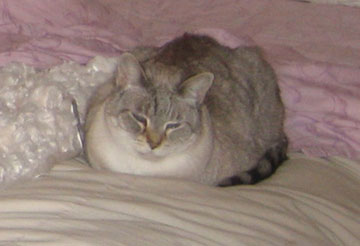